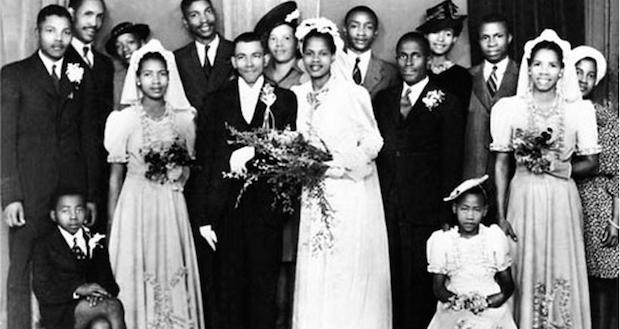 Desmond and Leah Tutu recently renewed their wedding vows in celebration of their 60th anniversary. Being married for 60 years is a great feat – especially considering that the Tutus were able to do hold it together the difficult struggle years, which took a toll on many a political couple. Here are five political couples who struggled through apartheid together. By PONTSHO PILANE.

In 1960, the ANC asked the Thambos to leave South Africa so that they could continue the work of the organisation internationally. They settled in London with their three children: Dali, Nomatemba and Tselane.

In an interview, their son, Dali Tambo said that their parents adored each other despite being constantly separated due to Oliver’s activism.

“When we first left for London, my father told her that it will only be five years of hardship and activism, but it turned out to be 30 years,” Tambo said. “Exile robs you of home and it is culturally destructive but they made the best of the situation.”

The Tambos returned to South Africa in December 1990, after 20 years in exile. Oliver was elected national chairperson of the ANC but died of a stroke just three years later.

Adelaide served as a member of parliament from 1994 until 1999 and declined a second term. She died on 31 January 2007 and was buried in Wattville, her hometown, next to her husband.

Walter and Albertina Sisulu
Albertina Sisulu, often referred to as the mother of the nation, met Walter in 1941 while she was a nurse at Johannesburg General Hospital. According to Albertina, Walter was convinced early on in their relationship that they were destined to be together.

“He didn’t want to play around – he just wanted to marry me,” Albertina said.

When Walter first proposed to Albertina, she declined because she was compelled to take care of her younger siblings. They eventually married in 1944 and had five children together.

“The day I got married is the day I got emancipated as a woman. We were equals from the beginning,” Albertina remarked.

Walter died in 2003 – in his Albertina’s arms – and she followed eight years later.

They met in 1948 and got married in 1949. In a biography of the pair, Alan Wieder described the couple as “The perfect enemies for the white police state.”

Ruth was in exile in Mozambique in 1982 when she was assassinated by letter bomb, leaving behind Joe and their children.

During the Truth and Reconciliation Committee (TRC), Ruth’s killer Craig Williamson admitted that he killed her out of frustration – he had attempted to assassinate Joe several times but had consistently failed.

Thabo and Zanele Mbeki
Thabo Mbeki, the son of ANC stalwarts Govan and Epainette Mbeki, followed his parents’ footsteps into politics and the liberation struggle. He met Zanele Dlamini, a social worker who had just moved to London to study, while he was in exile there.

At the time, there was a vetting process for the partners of ANC cadres in exile, and Thabo was nervous that the ANC leaders would not approve of their relationship In the biography by Adrian Hadland and Jovial Rantao, They Fought for Freedom, Adelaide Tambo recollects how Thabo declared his love for Zanele.

“If Papa [Oliver Tambo] doesn’t allow me to marry Zanele, I’ll never, ever marry again. And I’ll never ask again. I love only one person and there is only one person I want to make my life with, and that is Zanele,” Mbeki said.

Fortunately for Thabo, the ANC approved of Zanele. They exchanged vows in 1974 at Farnham Castle in the UK. The couple officially returned to South Africa in 1990 and remain married to this day.

Winnie Madikizela-Mandela and Nelson Mandela
Winnie and Nelson’s famously failed marriage nevertheless remains one of South Africa’s most iconic unions. Nelson met the young Winnie Madikizela in 1957 when she was just 22 years old and waiting at a bus stop.

They got married in 1958 and later had two children: Zindzi and Zenani. After being married for just five years, Mandela, along with other ANC leaders, was arrested during the Rivonia Trial and sentenced to life in prison.

During his imprisonment, Nelson and Winnie stayed together – with Winnie at the forefront of the campaign for the release of her husband and all other political prisoners and enduring her own torture and persecution at the hands of the apartheid government.

When Nelson wrote letters to Winnie from prison, he would declare his undying love for her in every letter.

“Letters from you and the family are like the arrival of summer rains and spring that liven my life and make it enjoyable.

“Whenever I write you, I feel that inside physical warmth, that makes me forget all my problems. I become full of love,” he wrote.

By the end of his incarceration, the strain of the separation and the political pressure on their marriage began to take its toll. They differed in political approaches and Winnie was notoriously implicated in the kidnapping and murder of teenager Stompie Seipei. The ANC began to see Winnie as a liability for his presidency and his image. The final nail in the coffin was Winnie’s affair with Dali Mpofu.

On his 80th birthday, Nelson married his close friend and companion Graca Machel, who was a source of great joy for him in his twilight years. Speaking of his relationship with Graca, Nelson once said, “Late in my life I’m blooming like a flower because of the love and support she’s given me.” Although their marriage had ended over two decades, Winnie was seen frequently visiting Nelson when he was in hospital before his death. In the end, Winnie stood side by side with Machel at the graveside of the man they had both loved.