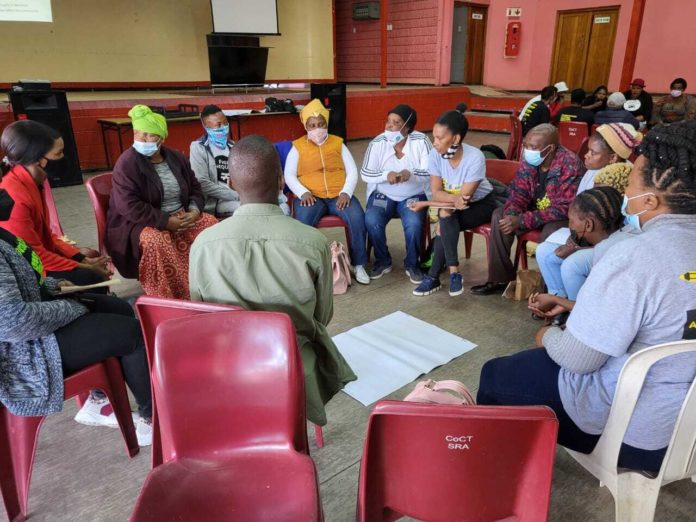 In the lead-up to the local elections, the Triangle Project hosted a community engagement on voter education in Khayelitsha, Cape Town. Triangle has partnered with MyVoteCounts, the Housing Assembly and Equal Education on the engagements. The Daily Vox spoke to Lebo Mncayi, Triangle Project’s political engagement movement building coordinator.

Mncayi said the engagement was about the importance of political voices and critiquing electoral processes. The engagements looked at the entirety of the democratic system and its dysfunction. Many communities remain unchanged. People are now realising protests alone will not solve community-based issues, Mncayi explained.

The first engagement in Cape Town had 70 attendees from in and around the area. People were not shy to express their dissatisfaction, said Mncayi. They said it was great to see mind-shift changes around the traditional dominance of the political space.

“Many times voting was based on loyalty to the party. Now we can sense a shift toward critical thinking outside of loyalty to parties. People are thinking about alternatives. There was a robust engagement,” said Mncayi.

There were discussions around water, sanitation and the exorbitant costs of electricity. Another challenge that came up were the dangers of energy alternatives. “People in suburban settings can easily use gas. It is not a safe alternative in a township that is congested,” Mncayi said.

During the housing discussion, there was unanimous agreement that the local government has to deal with the backlogs. As townships get bigger, the burden on basic services grow, and become unmanageable, they said.

LGBQTIA+ community and the #LGE2021

“We have looked at the manifestos of the dominant political parties. While some mention the LGBQTIA+ community, they don’t go into detail. We don’t find these parties actively engaging the community at all,” said Mncayi. One of the issues they will be embarking on is a social audit of townships in the Western Cape with a focus on opportunities for queer shelter or inclusive shelters.

They found the 2020 Commission for Gender Equality Reports (CGE) needs supplementation with lived experiences of the unhoused and sex workers. The social audit is necessary especially with how the by-laws seem to be criminalising homelessness.

The City of Cape Town passed the Unlawful Occupation by-law

“Voices are being ignored. They say they have engaged, but who are they engaging? What narratives are coming out? They are certainly not the narratives of the marginalised,” said Mncayi.

The recording of the engagement will be used for public participation submissions. “Many people are excluded from community participation when decision making takes place. It seems to be intentionally designed to silence certain voices. We can make sure people who don’t have access to data and smartphones are heard too,” Mncayi said.

Part of the engagement was to encourage people to vote. Mncayi said they understood that people are apathetic where they have seen no changes in the past 20 years. They said if people can grasp the power of their vote they can change the course of history and how things are done.

“My personal message is that if you are voting the same, and nothing changes then maybe take a look at voting differently,” they said. People are learning how to hold leaders accountable and be present, Mncayi said.

It was intentional not to invite political parties to the space. Mncayi said they have had coverage, access, and budgets to spread their message. They don’t need more airplay.

“We want to center communities’ needs and voices,” said Mncayi.

The next session will on October 14 in the Kwazulu-Natal (KZN) township, Edendale. Edendale forms part of the Msunduzi local municipality in KZN. The municipality’s revenue was adversely affected in the aftermath of the riots in July. Civil unrest spread across the KZN and Gauteng provinces between July 9 to18 this year.

On the 23rd, the group will be in the Sweetwaters township in King Williams Town, Eastern Cape. Sweetwaters forms part of the Buffalo City Metropolitan Municipality. In 2018 residents protested against poor service delivery.

“Unearthing lived experiences of people on the ground are what matters,” Mncayi said.