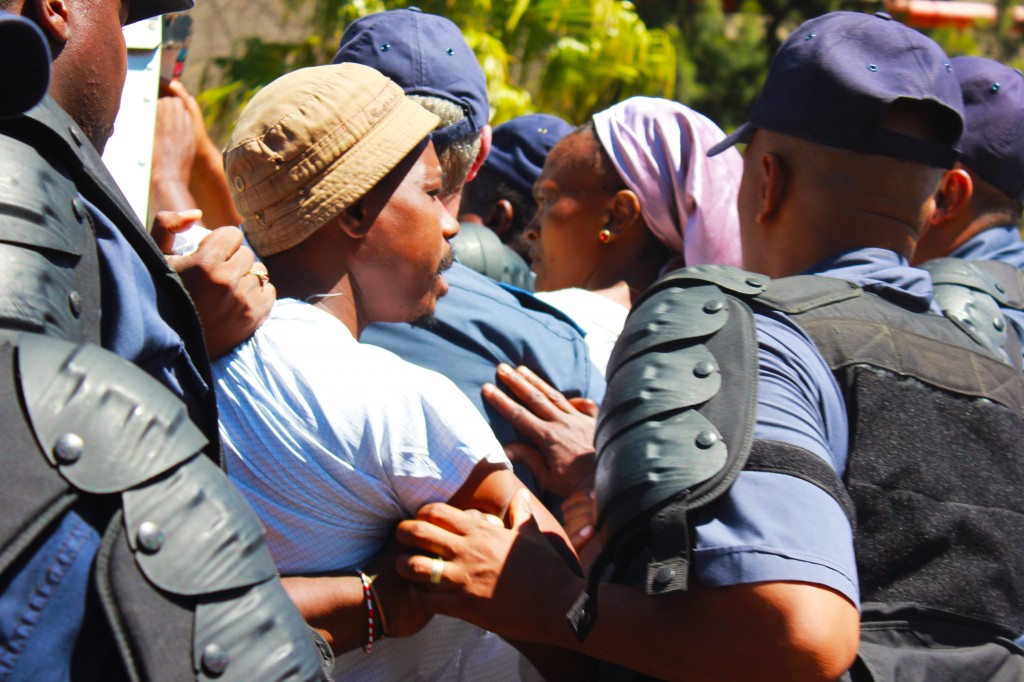 From stoic police justice to the supposedly illegal protestors, what happened to the story of humans, asks RA’EESA PATHER.

The Western Cape has entered 2014 to the beat of protest. In the past month I have stepped into at least four demonstrations in the Cape Town CBD, and many others have been staged along dusty, shack-lined pathways.

Last Thursday, protestors sprawled through Cape Town in an agitated rally for service. South Africaâ€™s protest narrative is penned by police action and the conduct of citizens who stand in opposition. In the fray, the human element is often lost, but I have spoken to strangers who danced across the tar, and their humanity confronts me.

They are known as the â€œpoo protestorsâ€ and over the past year they have plagued Cape Townâ€™s picturesque streets. Last year, Loyiso Nkohla – a former ANC councillor – and his followers were condemned for protesting poor sanitation in townships by throwing buckets of human faeces in public areas. Nkohla resultantly lost his job and is constantly ridiculed within the media.

October saw the renewal of â€œpoo protestâ€ dismay as Nkohla and his supporters led a march that violently ripped through the CBD, leaving the debris of vandalised vendor stalls in its wake. The â€œpoo protestorsâ€ were cursed and blackened, and with the damage done to small businesses itâ€™s not hard to understand why. Many people lost that day.

But why did they do it, and why have they returned?

“Service delivery” is strewn throughout conversations and in the media so often that its meaning is lost. The term in itself is a euphemism â€“ ironic considering the name â€œpoo protestorâ€ is anything but polite. A “lack of service delivery” is the kind way to articulate that people live with human faeces in their houses. Itâ€™s a neat little box for the ghastly business in townships that everyone knows exists, but few truly acknowledge.

The right to dignity is globally recognised, yet somehow service delivery and poor sanitation have nothing to do with dignity in South Africa. So what if a child sleeps with the stench of waste festering across the room? I walk into a bathroom decked out with a flushing toilet and can barely tolerate that same smell for five minutes. They live with it, and they have done so everyday for the past 20 years.

The argument â€œAg, theyâ€™re from the Eastern Cape, what do they want here?â€ is one that Iâ€™ve heard often in dialogue with observers puffing on cigarettes as they watch toyi-toyiers. Itâ€™s a poor show of basic human consideration. Yes, you have waited through apartheid and you are now waiting through democracy to receive your home. Others wait with you,many of them local – let them have their fight. It is, after all, their constitutional right. Or is that as irrelevant as dignity?

Violence is violence regardless of the war that is waged. On Thursday, stun grenades and water canons were launched onto the protest ground. People have been injured and maimed in countless acts of protest in the past two decades, and often the violence is chilling. Innocents should not be harmed through protest action for proper sanitation, and small businesses should not be destroyed.

But they have been, and as South Africans perhaps we need to change the way we talk about those uncivilised protestors and try to march in their shoes. How else will we write the ending?