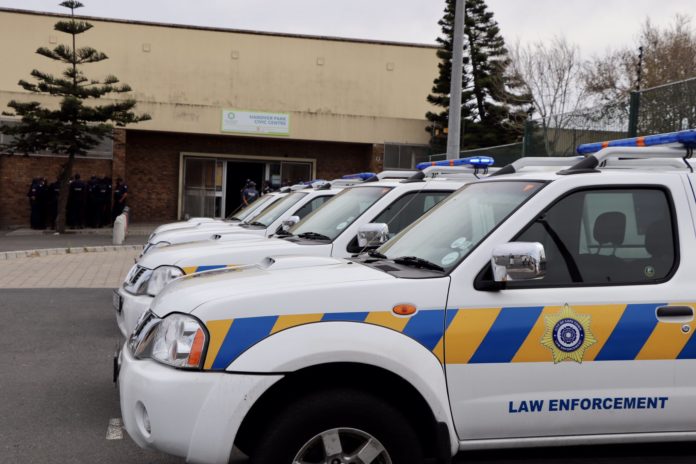 On September 18, hundreds of people marched in protest against the COVID-19 vaccines, in Seapoint, Cape Town.  The South African Police Service (SAPS) said the march was illegal, and a case docket will be opened. No one was arrested for the alleged lockdown rules contraventions. Just days before the march, Cape Town’s enforcement (metro police) agencies issued fines for those not wearing face masks in public.

With the local government elections approaching, The Daily Vox team examined policing it in different mandates.

SAPS is governed by Chapter 11 of the Constitution of the Republic of South Africa, 1996 (Act 108 of 1996). Their core functions are to prevent, combat and investigate crime. They are also to maintain public order, protect and secure the people of South Africa and their property, and to uphold and enforce the law.

Metro police departments were established in terms of the SAPS Act 68 of 1995. Metro police only have three core functions; crime prevention, road traffic policing, and by-law enforcement. The metro police are not empowered to combat and investigate crime.  They have various powers extended to them through regulations to maintain public order. Their role is complementary to SAPS. Metro police belong to different municipalities while the SAPS work countrywide.

The metro police have the legal mandate to prevent crime. The SAPS have a mandate to proactively fight crime where it exists and to investigate crime once it has occurred.

Who is responsible for crowd control?

SAPS is in charge of public order policing (POP). Section 205 (3) of the Constitution of the Republic of South Africa directs that SAPS maintain public order and enforce the law. The National Instruction on the POP also states that SAPS, in partnership with the metro police, promote public safety. To ensure this, SAPS must be proactive in diffusing situations that can escalate into violence.

The mandates of metro police and the SAPS

Karen Meyer, Tshwane mayoral member for community safety(MMC) said while the metro police are not mandated to combat or investigate crime. They do have some functions extended to them to maintain public order, and combat illegal land invasion and cable theft.

The visible policing component is achieved through road traffic policing and by-law enforcement by the metro police. This is how the metro police fulfill their legal mandate to prevent crime, as opposed to SAPS’s mandate to fight and investigate crime, Meyer said.

Meyer said the law and reality don’t often match, and the metro police often take up additional roles and responsibilities,she said. “This multi-agency nature of by-law enforcement makes it a challenging environment and responsibility,” Meyer said.

A community policing forum (CPF) is a platform where community members, organizations and the police meet to discuss local crime prevention initiatives. According to the SAPS Act, CPF’s are the only recognised consultative forum. This permits communities to make their policing concerns known to the police. The forums promote the accountability of the police to the community. The Act also provides for maintaining relationships between communities and police. It also improves transparency and accountability of the SAPS to solve problems jointly with the CPF’s.

The Johannesburg CPF chair  Lionel Stein said, the spirit of CPF’s is to work with SAPS with a single aim to rid an area of crime. CPF’s can advise SAPS on community priorities, and see where the gaps are with policing, said Stein. CPF members are not allowed to arrest, or take down statements. They can assist with fundraising for equipment like mobile phones.

“The powers and effectiveness of each CPF depend upon the police at station level. You need a station commissioner who is favourable towards the partnership,” Stein said.