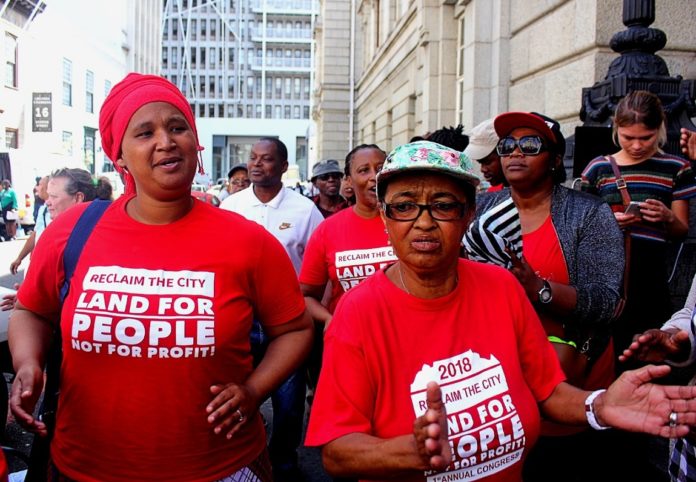 The fight for affordable social housing continues in South Africa. The Cape Town High Court has been hearing the Tafelberg case this week.

What is the case about?

Two civil society organisations from Cape Town, Reclaim the City (RTC) and Ndifuna Ukwazi (NU) are challenging a decision by the Western Cape provincial government. The government intends to sell the Tafelberg property to the Phyllis Jowell Jewish Day school. This property is located in Sea Point. According to the two organisations it “provides a prime opportunity to redress spatial apartheid through the provision of well-located land for social housing”.

Activists have actively campaigned against the decision to sell the school. And in response, the process was at some point halted in order for public consultations to be made. Despite many public submissions calling for the land to be used for housing, in 2017 the city decided to go ahead with the sale.

In May 2017, NU launched a review decision to get the court to set aside the sale.

What is spatial apartheid?

For years now, RTC has been protesting for affordable housing in the inner city, and the desegregation of the city. Apartheid spatial planning enforced through the Group Areas Act meant that black, coloured and Indian people were forcefully relocated to the outskirts of major cities. In Cape Town, this mode of planning persists – The city is racially and economically segregated. Black people are forced to live on the outskirts of the city, far away from economic opportunity.

In Cape Town, along with redressing the effects of spatial apartheid, there is a need for affordable social housing. In 2017, the City announced that they would be setting aside ten sites around the city to develop affordable housing. This hasn’t materialised yet.

Why is this case important?

Speaking to The Daily Vox NU researcher Michael Clark said the case is important because it is centered around the issue of well-located public land and how it should be used. Clark said that while the Western Cape government and the City of Cape Town argue that the land has financial value, NU and RTC are arguing the value is more than that.

Over and above the calls for the sale to be set aside, NU and RTC are calling for the public land to be used more effectively used to address social needs, specifically for affordable housing.

Along with RTC and NU’s case, the department of human settlements have brought a case against the province and city. This case was being heard at the same time as RTC and NU’s case. They are calling for better coordination and cooperation between the different spheres of government. Clark says the national department is accusing the province of acting unilaterally and not engaging other roleplayers in the space.

As a friend of the court, NGO Equal Education have emphasised the negative impact that a lack of well-located social housing in central Cape Town has on learners’ equal access to basic education.

Implications of the case

Clark notes that the case is important symbolically because the implications of government selling off public land raise questions about who cities are built for. “It’s a city that would exclude the poor and working-class community. With the historical context that we know exists in our cities, where historically, black and colored people were forcibly removed from cities. We’ll just be entrenching that [if the sale goes through],” he said.

Once both sides have presented their case before the court, the judges will have an opportunity to consider the arguments before making a decision. Judgment is likely to be reserved while the judge makes a final consideration.