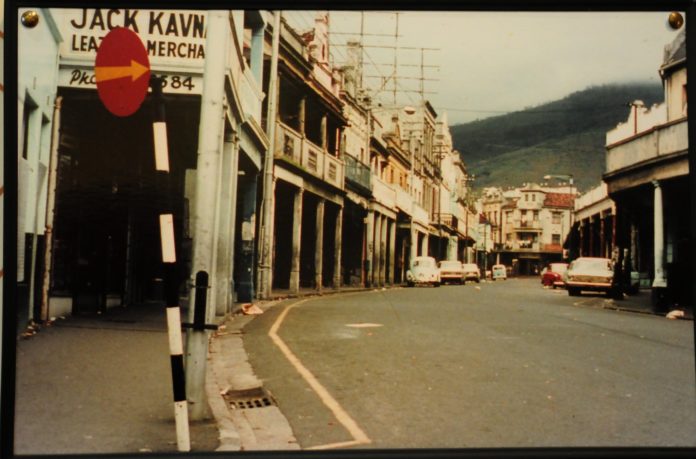 The book, District Six: memories, thoughts and images, compiled and edited by Martin Greshoff, is a compilation of autobiographical stories and poetry written by former District 6 residents. By Janine Lange.

The collection of personal accounts and reflections, creates a community narrative, made up of many different voices and perspectives.  The books’ contributors mainly consist of ‘lay’ authors, using the varied dialects of Afrikaaps and Mengels alongside standardised versions of English and Afrikaans, adding to the linguistic depth and richness, and an earthy flavour to the text.

These first-hand accounts are brought together by the photography of Jan Greshoff, a Dutch-born architect who resided in Cape Town. The photographs and stories in the book are a period piece. They capture the tail-end of an era that spanned a century, beginning with the manumission of enslaved people in the mid-19th century. The century ended in the enforcement of the Group Areas Act, declaring racial apartheid and segregation of residential and business districts across South Africa. Between 60 000 to 80 000 residents were forcibly removed from District 6, and into various townships on the Cape Flats between the 1960s and 70s.

The authors would have been children at the time of the demolitions, and so most, if not all the stories and poems are tinged with the sadness that accompanies never having had stability, always living under the threat of impending doom, and so always bittersweet. There is a romanticism that accompanies many childhood memories, but also depictions of brutality and the witnessing of acts perpetrated by members of community and state, that has clearly marked the memories of the contributors and creates a lasting impression on the mind of the reader.

Two such descriptions are the witnessing of a rape behind the British bioscope, and the black flag at half-mast at the Roeland street prison that would signal the hanging of a prisoner on Fridays. Whether positive or negative, in all ways the stories detailed are impactful. There are no former residents of District 6 in this account, that do not remember the neighbourhood with nostalgia and who would not have preferred to have gone back, for business, or love or to live. The editors’ choice to leave the stories largely untouched in terms of the dialect, feel and even potentially derogatory language in terms of the modern context of language usage, is interesting.

In making that choice, the editors have allowed for a more natural and unscripted storytelling – one in which the warts and all appear to show the diversity of views and even the biased perceptions of the authors – in an actual community setting.

A heritage of loss: Address Unknown and a second wave of displacement

The impacts of the forced removals are implied rather than attended to in great detail, but instead, it is the holding on to memory, to a time that exists solely in the mind, and that, within a generation will be entirely wiped out, that captures the reader. Although the photographs in the book do not portray intimate moments, they serve as catalysts for the outpouring of memory and imagination that may, without the prompt, be lost in time.

Its importance is as an addition to the growing, multi-layered intergenerational archive, which captures and memorialises the stories of an ageing generation of ex-District 6 residents, whom, without a physical landmark to revisit, have only their memories to transport them, and us all, back to a much-revered site of inter-racial, mainly harmonious coexistence within a deeply troubled time and against the backdrop of large scale historical violence perpetuated in the name of crown and colony.

Its importance is in compiling a coherent story for generations to come, when living memories fade and all that is left to hold on to are the scraps of decontextualized memory of words, phrases, movements and games passed down.

Janine Lange is an author, trauma-informed embodied narrative practitioner, kundalini yoga teacher and social entrepreneur. She holds Masters degrees in development studies and creative writing, and is currently a PhD candidate and an Andrew C Mellon fellow in the gender studies programme at UWC.