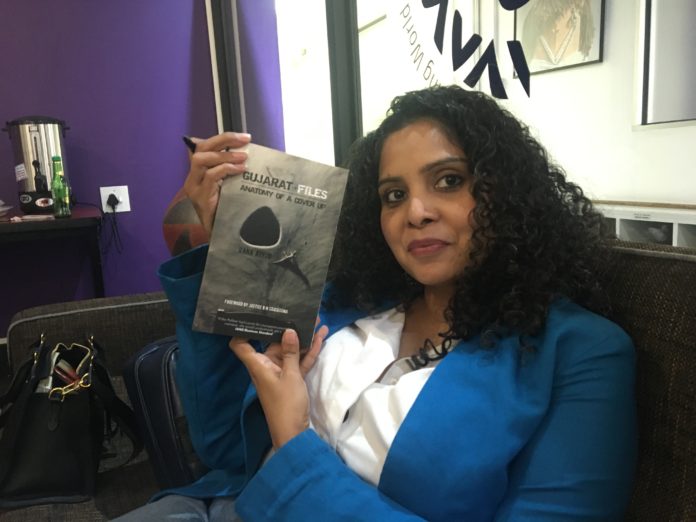 Around 2010 journalist and writer Rana Ayyub went undercover in Gujarat, India. Posing as an American film student armed with eight cameras, Ayyub managed to get access to senior police officers and politicians. While undercover she even managed to meet current Indian prime minister Narendra Modi. She was investigating the 2002 Gujarat riots.

The 2002 Gujarat riots were three days of inter-communal violence in the Indian state of Gujarat. There were mass casualties from the violence with 790 Muslims being killed. Modi who was the chief minister at the time was accused of initiating the violence. Many police and government officials were accused of directing the rioters and giving lists of Muslim-owned properties to them.

Following from that investigative work, Ayyub released the book The Gujarat Files: Anatomy of a Cover-Up in 2016. The book details the role that Modi and other officials played in the riots. Ayyub’s book is currently not freely available to India because of the explosive content contained within. Ayyub has also had to face extreme online harassment as a result of her work. Her personal details have been released online and there have been smear campaigns against her on social media.

Ayyub visited South Africa on a two-day trip to promote her book and speak on right-wing fascism in India. Ayyub has an impressive resume. She has written for TIME magazine, the Washington Post, New York Times, Guardian and Foreign Policy. She was also just appointed the global opinions writers for The Washington Post.

Ayyub held three speaking events in Johannesburg. She was hosted by the Conscience Collective partnered with the Afro-Middle East Centre. On the second day of her trip, she visited the University of the Witwatersrand to speak on the “Politics of Majoritarianism and Marginalisation in Democratic India.” Perhaps because it was hosted during lecture times, the event wasn’t well-attended. Nevertheless, a robust and interesting conversation took place.

During her talk, Ayyub mentions that she has to take anxiety medication before speaking events. She says the experiences she had to go through while undercover is responsible for this. She had to pose as a Hindu nationalist who hates Muslims for eight months. Despite the great work she accomplished, Ayyub says she would not advise anyone to go undercover.

After eight months of doing difficult work undercover, Ayyub recounts how her editor told her at the last minute, they wouldn’t be going through with the story. This was because at this point Modi was gaining more political power, and her editors feared the repercussions. Ayyub then decided to self-publish her findings in a book: Gujarat Files. Her book was censored at every turn including by her fellow journalists in the media industry.

However, as Ayyub said: “Truth has its way out. And that’s what my journalism is all about.” Despite all this resistance, her book has sold thousands of copies around the world.

Commenting on the fact that the people at the centre of her investigation including Modi, and the Home Minister Amit Shah now occupy the highest political positions, Ayyub says she wonders about the Indian population. “I look at the 1.3 billion population, and I wonder if their moral compass allows them to have a man like him (Shah) as the minister of the country, but clearly it does. I mean, my country made a man Prime Minister whose role in the 2002 riots is known to everyone,” she said.

Listening to Ayyub say that felt uncomfortable, especially when looking at who is the current president of South Africa. Ayyub alludes to this when speaking about the relationship between South Africa and India. There is a shock in her voice when she wonders why South Africa hasn’t taken a position on Kashmir. But she answers her own question.

“Well, India is an important ally for South Africa. Mr. Ramaphosa is not exactly the most democratic leaders that we have seen,” she said.

During the discussion, Dilip Menon from the Wits Centre for Indian Studies in Africa was a respondent to Ayyub. Menon said: “It’s our journalists like Rana, who actually keep alive the idea that we need to become a democracy. India is not a democracy. It is a fundamentally hierarchical and violent society towards its minorities, be it Dalits or Muslims.”

Menon said this is something happening around the world from India and Europe. The rise of right-wing politics and fascism is destroying the idea that these places and countries are secular. Menon said that’s why the work Ayyub does is very difficult.

Just after her talk at the University of Witwatersrand, The Daily Vox had the opportunity to sit down with her to chat about the media in India and worldwide.

For almost ten years now, Ayyub has been the subject of much harassment and online trolling. The harassment has been on many different social media platforms and has accused Ayyub of all number of things.

Ayyub relates how her picture was photoshopped into a pornography video. She said the video was shared widely around the country by leaders of the ruling BJP. Ayyub says she went and filed a case with the police and the United Nations even asked the government to take action.

“The case has been going on for one year and there has been no justice. The government treats me as its enemy, as opposed to somebody who’s trying to tell the truth to the world. So I find myself isolated because my fellow journalists are not there to support me,” said Ayyub.

Several United Nations rapporteurs have expressed concerns about these attacks on Ayyub. These statements came in light on the killing of journalist Gauri Lankesh in 2017. Lankesh was shot in the head and chest outside her house. During the discussion, Ayyub recounted how just weeks before Lankesh was killed, she’d published a Kannada-language version of Gujarat Files: Anatomy of a Cover-Up.

To end the interview, Ayyub gave some profound advice. In this world where journalism is being threatened not only by politicians but also by journalists themselves doing a disservice to the craft, her advice rings true.