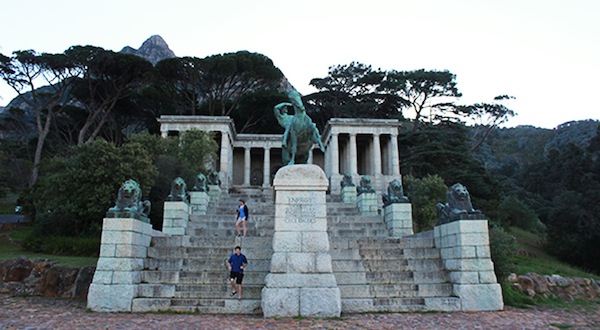 I’ve never paid much attention to Cecil John Rhodes, but his presence is entrenched in my city. Rhodes Memorial is one of Cape Town’s most loved tourist attractions. Set against the backdrop of Devil’s Peak, the iconic memorial stands as a salute to a colonialist who imprisoned and enslaved the people who called this land home. A hundred years after it was built, we are free of colonialism and apartheid. But why does this monument to a colonist stand while South Africa’s freedom fighters go unremembered?

The memorial has survived 100 years without trouble, and is seemingly indestructible. It features a gallant statue of Rhodes, seated atop a rearing horse amid sweeping columns, 49 bulky steps, and eight imperial lions.

The monument, completed in 1912, was built in deference for all that Rhodes had accomplished, and his considerable contribution to the development and increasing prosperity of Southern Africa, according to the Rhodes Memorial website.

PR can be so delusional.

Rhodes was not a hero. He perpetuated the idea that black people were worthless savages and that humanity revolved around British white supremacy. De Beers mining company came to fruition under his watchful gaze, enslaving black labourers and forcing them to carry pass books that would one day come to characterise apartheid South Africa. Rhodes was also big fan of segregation. In his time as prime minister of the Cape colony, he legislated the Glen Grey Act, which forced black people to leave their lands, and gave white people the pick of the crop.

In many ways, colonised South Africa formed the foundations of apartheid South Africa. And yet through this monument and others like it we immortalise Rhodes, while South Africa’s true heroes remain unsung. The controversy around Rhodes has not been quiet.  He donated the land on which the University of Cape Town is built. As such, the campus pays tribute to him through a statue at the bottom of its famed Jameson steps. That statue has been defaced, and students have hosted debates deliberating whether it should be removed.

Steve Biko, Walter and Albertina Sisulu, Govan Mbeki, Robert Sobukwe, Miriam Makeba, Chris Hani, Ruth First – the list is almost endless. They abandoned their families, risked their lives, and faced exile and unfathomable danger so that we could be free. They all deserve some form of acknowledgement and respect. Sure, we’ve renamed streets in Cape Town, Johannesburg honours Madiba through Nelson Mandela Square, and O.R Tambo and Albert Luthuli have structures of national importance named after them. But our fighters built us a nation, so why haven’t we built something for them – some monument that will encourage reflection and remind people of what we’ve achieved as a nation?

The expense of building a structure similar to Rhodes Memorial today would be prohibitive and our young government must have better uses for the funds (security upgrages at Nkandla notwithstanding). But we need something – some fixed structure that will one day remind South Africans not yet born, of the cost of their freedom.

I don’t believe we should destroy Rhodes Memorial or the statue at UCT. I dislike both but they are a part of our history and a reminder that men like Rhodes once stole land from our people, enslaved them, and dehumanised them. We cannot erase this history, but we can adjust the existing monument to reflect what truly happened. An information board could easily be placed alongside the memorial to inform visitors about the real nature of Rhode’s “considerable contribution” to our nation.

Recently, the City of Cape Town has considered renaming one of its main highways – Table Bay Boulevard – after FW de Klerk. The Daily Vox asked South Africans what they thought of the change, and Mpho Mopai, a 33-year-old Capetonian, said: “We have a lot of black people who are heroes who fought for us, why should we name a street after de Klerk? Most white people got their recognition when they were in charge. Now it’s time for those who fought for what we have today to get their recognition.”

*Update: It’s been pointed out that there is a large plot of land in Pretoria called Freedom Park which was “built into a national memorial and museum” dedicated to the fighters who fought against apartheid and “embraced by all South Africans”. But really, does anyone even know about this place? Also, it’s in Pretoria and you have to pay R90 to get in. Freedom, as we know, comes at a price.