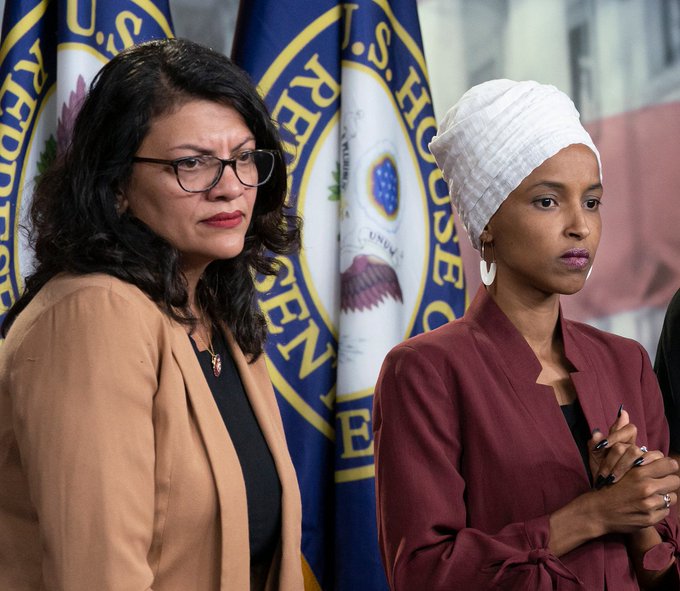 United States congresswomen Rashida Tlaib and Ilhan Omar were denied access to Israel and occupied Palestine by Israeli authorities on Thursday . The Israeli authorities denied them access reportedly in response to a tweet from American president Donald Trump. A week prior, 41 Democratic members of Congress went to Israel on a trip organised by pro-Israeli lobby group American Israel Public Affairs Committee (AIPAC).

“I would like to request admittance to Israel in order to visit my relatives, and specifically my grandmother, who is in her 90s and lives in Beit Ur al-Fouqa,” said Tlaib.

On August 15th, Trump tweeted: “It would show great weakness if Israel allowed Rep. Omar and Rep.Tlaib to visit. They hate Israel & all Jewish people, & there is nothing that can be said or done to change their minds. Minnesota and Michigan will have a hard time putting them back in office. They are a disgrace!”

On Thursday, the pair were denied entry into Palestine. The Israeli government said they would block Omar and Tlaib’s visit. According to an Israeli law which was passed in 2017, anyone who supports the Boycott, Divestment and Sanctions (BDS) campaign is prohibited from entering.

Both Omar and Tlaib have spoken out strongly about their support for Palestine and the BDS campaign.

Omar spoke out against the decision saying that “Trump’s Muslim ban is what Israel is implementing, this time against two duly elected Members of Congress. Denying entry into Israel not only limits our ability to learn from Israelis, but also to enter the Palestinian territories.”

She said it was not surprising that Netanyahu who “restricts the freedom of Palestinians” would align himself with “Islamophobes like Donald Trump.”

Alexander Ocasio-Cortez, another Democrat congresswoman said: “Netanyahu’s discriminatory decision to ban members of Congress from Israel harms int’l diplomacy. Visiting Israel & Palestine are key experiences towards a path to peace. Sadly, I cannot move forward w[ith] scheduling any visits to Israel until all members of Congress are allowed.”

She is just one of many Democratic politicians including senators Bernie Sanders and Elizabeth Warren who took to social media to criticise the actions of the Israeli government. Many of the Democrats including Ocasio-Cortez and Judy Chu seem to imply that Trump was the reason Omar and Tlaib were not allowed into Israel and Palestine.

Warren who is one of the Democrats possible presidential campaign said: “Israel doesn’t advance its case as a tolerant democracy or unwavering US ally by barring elected members of Congress from visiting because of their political views.”

However, as journalist Sana Saeed pointed out Israel is currently occupying Palestine and insituting a system of apartheid which does not make it a “tolerant democracy.”

Both Omar and Tlaib made news headlines around the world when they became the first Muslim women to be elected to the US Congress in 2018 They have been outspoken about many Trump’s policies including immigration and his relations with Israel. They are the first and only lawmakers to support the BDS movement.

Tlaib is Palestinian-American. Both her parents were born in Palestine, and many of her family members live in the occupied West Bank. Speaking to Palestinian journalist Janna Jihad in July, Tlaib spoke exceitedly about her trip to Palestine. She said she wanted to go to the trip so she could show her constituents what occupation was in practise.

“I am hoping this trip will shed light into the struggle and pain of feeling oppressed, and what it really feels like to be Palestinian under Israeli occupation,” said Tlaib.

In 2018 Tlaib opposed providing aid to a “Netanyahu Israel” and supported the Palestinian right of return and a one-state solution. She was one of the first Congresspeople to openly support BDS.

Earlier this year Omar introduced a bill affirming that Americans have the right to participate in boycotts. Her bill didn’t directly mention the BDS movement but coincided with another bill from Democrat leadership to condemn BDS. Tlaib was a co-sponsor of Omar’s bill. The two of them opposed the bill to condemn BDS which passed while they were on their way to Palestine.

Banning Tlaib from entering the land of her parents and her ancestors once expose the illegal repressive Israeli regime. This is not something unique to Tlaib. Palestinians from around the world are often denied entry to visit their families. This is in contrast to Israeli law which allows any Jewish person to become a full Israeli citizen with rights.

It remains to be seen whether the Israeli government will cave to the pressure and give Omar and Tlaib entry into Israeli and the occupied Palestinian territories. However, as an apartheid state which constantly flouts international law, it seems unlikely.